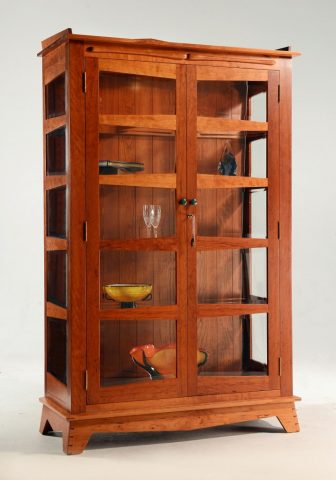 John Ferguson may be best known throughout the region for his Bergelin Custom furniture but his roots are in hand crafted wood furniture and accessories.   From 1977 to 1987, Ferguson became deeply involved in Appalachian Mountain Culture.  He apprenticed at a cabinet shop founded in 1872 by Felix Barr, a man who walked from Jefferson NC to Galax, Virginia with a lathe strapped to his back.  Under direction of his 85 year old son, Basil Barr also known as “Colonel”, Ferguson learned all his wood working knowledge in this Virginian cabinet shop.   Ferguson credits his success as a fine woodworker, producing shaker-style furniture and accessories, to the strong foundation received through this apprenticeship.  “I am drawn to the ideals of the Shaker tradition,” replied Ferguson, “Simplify and never sacrifice integrity or strength.”    Ferguson teaches Professional Crafts: Wood and Continuing Education woodworking courses at Western Piedmont Community College located in Morganton, North Carolina.